Odyssey of the Mind judges are an integral part of any tournament. Organizers work hard to provide teams with the best possible competition experience. Most tournaments require judges to attend a training session and pass a certification test in long-term or spontaneous. 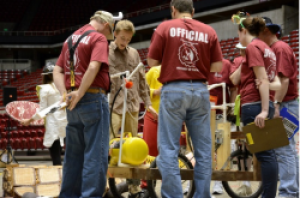 This is an optional position, but if enough volunteers are available scorechecker should be assigned to every long-term judging team. This individual collects scoresheets from the scoring judges and reviews them before sending them off to the Scoreroom. The Scorechecker makes sure the judges score within the appropriate range for subjective categories and award the correct number of points for objective categories. In spontaneous, a Score Compiler would be stationed in the Spontaneous Judges' Break Room and check scores before they are sent to the Score Room.

(One or possibly two per long-term judging team)

Style Judges receive the team's Style Forms from the Staging Area Judge and review them for accuracy and to learn which areas they are to score. The Style Judge scores these areas and gives the scored Style Form to the Head Judge for compilation onto the Master Style Form. Style Judges do not confer with each other to determine scores.

(One per long-term judging team and one per spontaneous team) 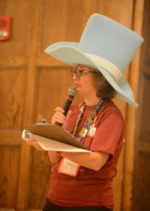 The Timekeeper is responsible for giving each team the exact amount of time allowed for the problem. It is critical that the Timekeeper be precise and exact in this regard.

(One or two for the long-term structure problem)

(One per long-term problem site, unless the space is open with no entrance or exit door)

Doorkeepers make certain that audience members do not enter during a team's performance. They also make certain that spectators give right-of-way to teams entering and exiting, help with crowd control, answers questions outside the door (such as “which problem is this?” or “where are the restrooms?” or “is this site on schedule?”) Doorkeepers should, ideally, be certified officials, as they are substitute officials the day of the tournament, if someone is ill or does not show up to judge.

World Finals judging is some of the most exciting as the world's best teams are presenting, a fun community of world finals officials exists, and judges have the chance to partake in fun activities like pin trading or the float and banner parade.

Although World Finals organizers recognize that certification is not required to perform the duties of some of the positions, because of the extensive commitment that must be made in advance, they require certified judges for all members of a long-term or spontaneous judging team. This assures that, should someone drop out at the last minute, organizers have an ample number of judges already committed to World Finals who can competently fill any judging position. Organizers sometimes have to make changes in assignments right up to the first day of competition. World Finals is a hectic time, but there are many rewards. Every position is important and must be filled.

It is also important that organizers offer an opportunity to people who have never before judged at the World Finals. As those folks who have judged at World Finals in the past know, the experience is extremely valuable and helps these judges provide a lot of help to their local associations. Organizers will use many experienced World Finals judges since their goal is to make sure the teams have the best possible experience. However, organizers will include at least one judge new to World Finals on each long-term judging team and five to the spontaneous judging pool, so some folks who judged many times in the past may be asked to stand down this year in order to give other folks a chance to bring the World Finals judging experience back to their associations. Organizers will also consider geographical location when selecting judges.

Q: Help! I’ve been dragged into . . . I mean I cheerfully volunteered for this Odyssey of the Mind, but I don’t know the first thing about it. What do I need to be a judge?

A: The only things you need to be judge for Odyssey of the Mind are: an open mind, a friendly smile, and two free days

A: One day is for Judges’ Training and the other competition day.

A: It is a creative problem solving competition for students in Elementary through College-age. Team members have been practicing their problem solving skills, and will have a chance show off those skills in the competition. The emphasis of Odyssey is on teaching and encouraging creativity. Odyssey of the Mind strives to provide a fun and enjoyable opportunity for kids to develop, express, and be rewarded for their creative sides. The farther out of the box they can get the better! Check out the Odyssey of the Mind article for more info!

Q: What if I can’t make one of the days?

A: Contact your Judge Coordinator and the coach of team you are representing immediately! In most regions/states, every competing team must supply at least one judge for the tournament. If they don’t, that team is not officially scored and is therefore ineligible to advance to state competition. So, as soon as you find out you can’t make either training or the tournament, let us know. The coach of the team you are representing needs to find a replacement for you. You cannot function as a judge without having gone through training.

Q: I’m doing this through my company and if I’m representing a specific team, I don’t know which one it is. How do I find out?

A: We need more judges than we get by asking for just one judge per competing team, so we rely on people like you to fill in the ranks. Therefore you may not be representing a specific team. If in your case you discover you can’t make it to training or to the competition, just contact the judges’ coordinator as soon as possible. It would be greatly appreciated if you could find somebody who could replace you.

Q: I had asked to Judge the problem my child/niece/nephew/student/etc is competing in so I could see them perform but you didn’t assign me to that problem. What gives?

A: To avoid as much conflict of interest as we can, we never assign somebody to judge the same problem as the team that their children are competing in. Judges should not expect to see their child's team perform.

Q: I would like to see a specific team perform. Will I be able to?

A: Probably not. As a judge, you will be busy the entire day judging the problem you’ve been assigned to. You need to be there for the entire competition. Much of the judging you will be doing is subjective in nature and therefore consistency in the judging team is essential to provide a fair assessment of the teams’ solutions. If a judge were to leave in the middle of the tournament (due to illness for instance) we would have to go back and remove that judge’s scores from all of the teams that had competed so far that day. Needless to say, this not only changes teams’ placements, but gives the score room nightmares.

Q: How many teams will I be judging?

A: It depends on what problem and division you are assigned to. Typically you will judge between 1 and 15 teams.

Q: When do I find out my judging role (position)?

A: A week or two prior to judges' training. Your Problem Captain will send you information before the training about the problem you will be judging.

Q: Which division is the most fun to judge?

A: Every division is fun to judge! Each division has its own characteristics. In Odyssey you learn to expect the unexpected. No matter what division you are judging, you will be amazed at the wide variety of solutions you see. If you come into it with an open mind, you will have a great deal of fun.

Except where otherwise noted, content on this wiki is licensed under the following license: CC Attribution-Share Alike 4.0 International